Thanks to this campaign, we are closer to stopping the pipeline than we have been in a very long time.

August 31 2020 was Trans Mountain’s final deadline to secure the insurance it needed to proceed with its climate-wrecking pipeline this year – a controversial project which would transport dirty tar sands oil all the way from Alberta to the coast of British Columbia.

And though we won’t know for sure which insurance companies renewed their coverage until the official certificate is published next April – we do know one thing: Thanks to this campaign, we are closer to stopping the pipeline than we have been in a very long time.

Back in 2019, we realized that taking on the insurance industry may just be one of our best strategies for stopping the Trans Mountain pipeline – and beyond that, stopping the expansion of the entire tar sands industry.

Because without insurance, the pipeline cannot go ahead. And as more and more companies start to live up to their climate commitments and refuse to insure tar sands projects, the harder it is for not only Trans Mountain – but any future pipelines – to get the backing they need.

For anyone who needs reminding, the Trans Mountain tar sands pipeline is a toxic project that, if built, would make it impossible for Canada to meet its climate commitments. It has also failed to obtain the Free, Prior, and Informed Consent of impacted Indigenous communities, and several Nations have been fighting the pipeline in court for many years. What’s more, there is an estimated 87% chance of an oil spill along the British Columbia coast if this project were to go through. Were that to happen, it could push the 73 remaining southern resident killer whales into extinction.

For all these reasons and more, the Stand.earth community mobilized in enormous numbers last year to pressure insurance companies to drop Trans Mountain – and got very close to getting Zurich, the pipeline’s biggest insurer, to drop out.

But we didn’t quite get there. So earlier this year, we launched a renewed push to un-insure Trans Mountain. And this time, we had major success.

After nearly 17,000 people signed the petition calling on Zurich once again to drop Trans Mountain – the company caved! Getting Trans Mountain’s biggest insurer to drop out, just weeks before the renewal deadline, was a major blow to the beleaguered project and left the company scrambling to find a replacement. 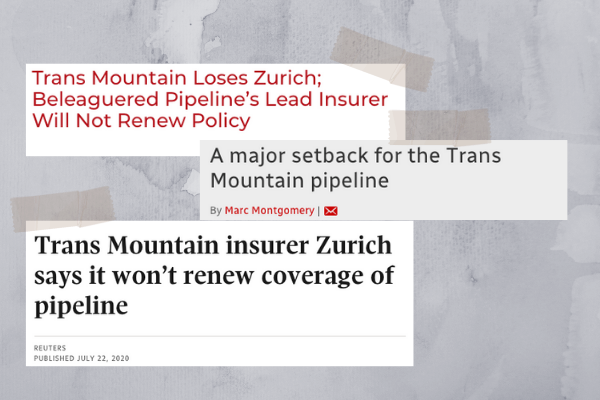 Our press release, and resulting media coverage of this major win.

Zurich wasn’t the only insurer to drop Trans Mountain this summer: its decision came after two other companies announced they would drop out, in response to letters we sent urging them to cut ties with the pipeline.

With three out of eleven insurers abandoning Trans Mountain in quick succession, we knew that momentum was building – but we had to keep up the pressure. Insurance giants Liberty Mutual, Chubb, AIG, and Lloyd’s were all still major backers of the pipeline.

So what did the Stand community do? You turned it up. Way up.

We were able to hand-deliver petition signatures from over 151,000 people (!!!) to Liberty Mutual and Chubb’s office in Vancouver – with parallel deliveries happening in cities around the world. 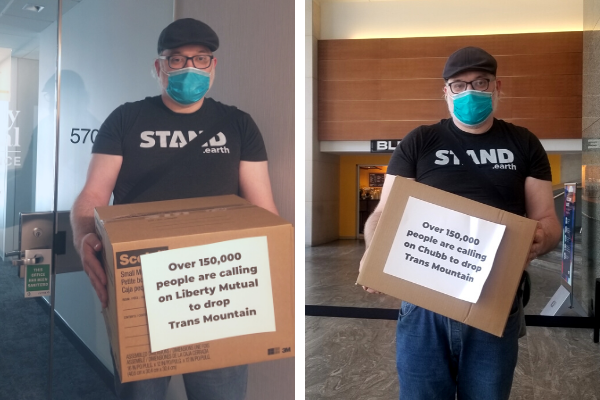 That’s me, delivering your signatures to Liberty and Chubb’s offices in Vancouver.

That wasn’t all – over 11,000 people sent letters to insurance company CEOs (it would take a looong time to clear out your inbox after that) hundreds of people flooded the phone lines of senior executives, and thousands spread the word on social media too.

Throughout this campaign, twelve insurance companies (not all connected to Trans Mountain) have decided to stop insuring the tar sands. That is no small feat. But thanks to public pressure, the insurance industry is waking up to the fact that fossil fuel companies are risky customers for them, and is well aware that climate change is an existential threat to its business model.

Click here to watch and share this video documenting the momentum building on this campaign from Canada and the United States to England and Switzerland, and help keep the pressure on insurance companies to get out of the tar sands. 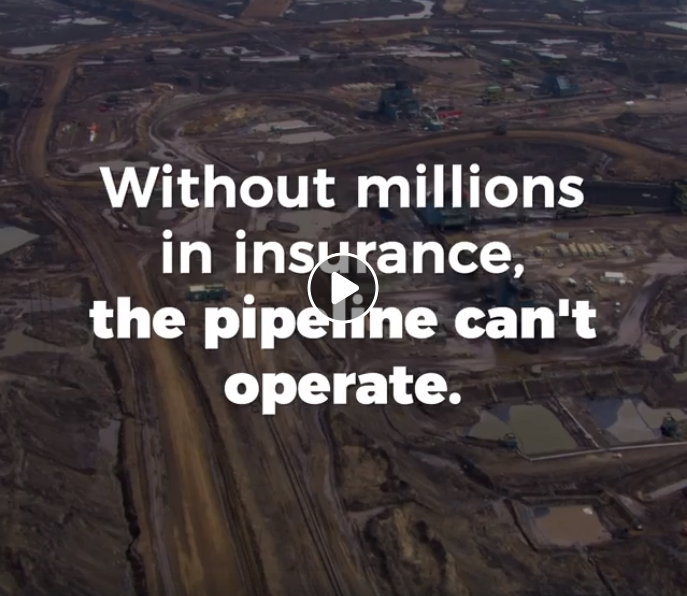 How else do we know our strategy is working? It’s making our opponents very worried.

Just days before the insurance deadline, a pro-oil group sent out an email to their supporters launching their own version of the insurance campaign to counter our pressure. I guess imitation is the highest form of flattery? 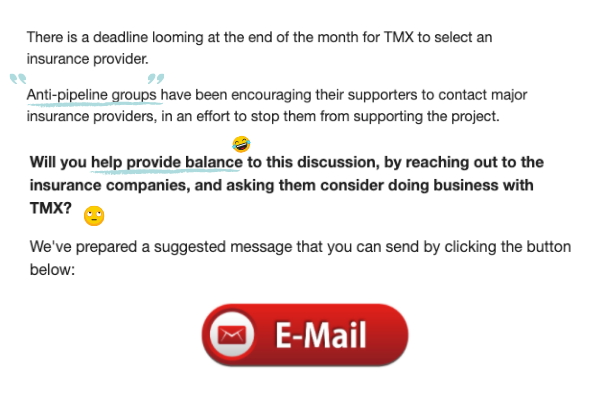 Sharing a screenshot of this email, just for laughs.

So now that Trans Mountain’s insurance deadline has passed, where to next?

Because our vision for this campaign is bigger than Trans Mountain alone, the work doesn’t stop. Even though Trans Mountain doesn’t have to renew its insurance for another year now, companies can adopt tar sands policies at any time. And in the middle of a climate crisis, we have no time to waste.

We know big companies like Chubb could be close to exiting the tar sands, because they adopted a policy ruling out coal projects after very little public pressure.

And on both sides of the border, we plan to continue getting under Liberty Mutual’s skin for as long as it takes.

Not long ago, groups held a protest outside Lloyd’s office in London too! 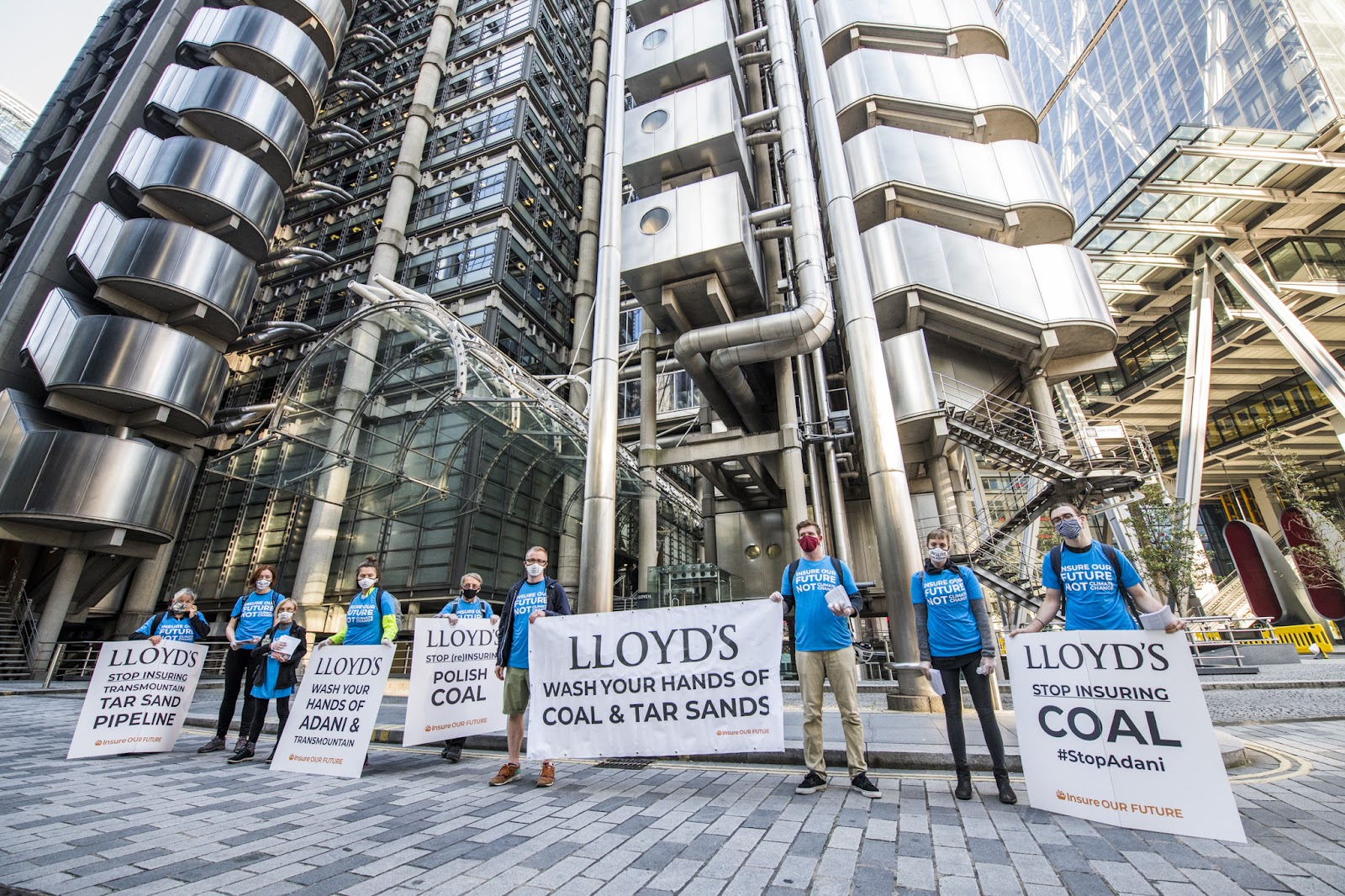 We still have a lot of exciting things planned to keep the pressure on insurance companies to get out of the tar sands, and drop Trans Mountain. If you’re able, please consider chipping in to help sustain the insurance campaign going forward.

The fight against Trans Mountain has been long and difficult. We’ve had victories that seemed final and defeats that we weren’t sure we could overcome.

And throughout it all, the Stand.earth community has stood strong.

We were there at the blockades, there when Kinder Morgan dropped out, there when Justin Trudeau bought the pipeline, there when Indigenous communities prevailed in court, there when the Canadian government decided to disregard Indigenous concerns, and you better bet we’ll be here until the day comes when this dangerous tar sands megaproject is scrapped for good.

I won’t lie to you. Winning won’t be easy. There are some who will throw up their hands and say that transforming the entire insurance industry and stopping Trans Mountain after so many years is now an impossible task.

But you know what? We’ve protected 65 million acres of forests that people thought couldn’t be saved. We’ve gone up against multinational oil, gas, and coal companies worth billions of dollars and come out victorious, blocking dozens of their projects that would have poisoned local communities and accelerated the climate crisis. We’ve shifted billions of dollars of purchasing from corporate powerhouses like Starbucks, Staples, and Levi’s onto sustainable pathways.

Because of people like you, doing the impossible has kind of become our jam. Our team is fewer than 50 people, but this community is more than 410,000 people strong and growing – and together, we’re using our collective power to fight climate change, protect wild spaces, stand with impacted communities, and say no to new fossil fuels.

Getting three of Trans Mountain’s insurers to back out this summer is an incredible victory, and it’s just the beginning.

Together with allies and following the guidance of Indigenous leaders, I know that we can win.

We can protect communities from gas stove pollution